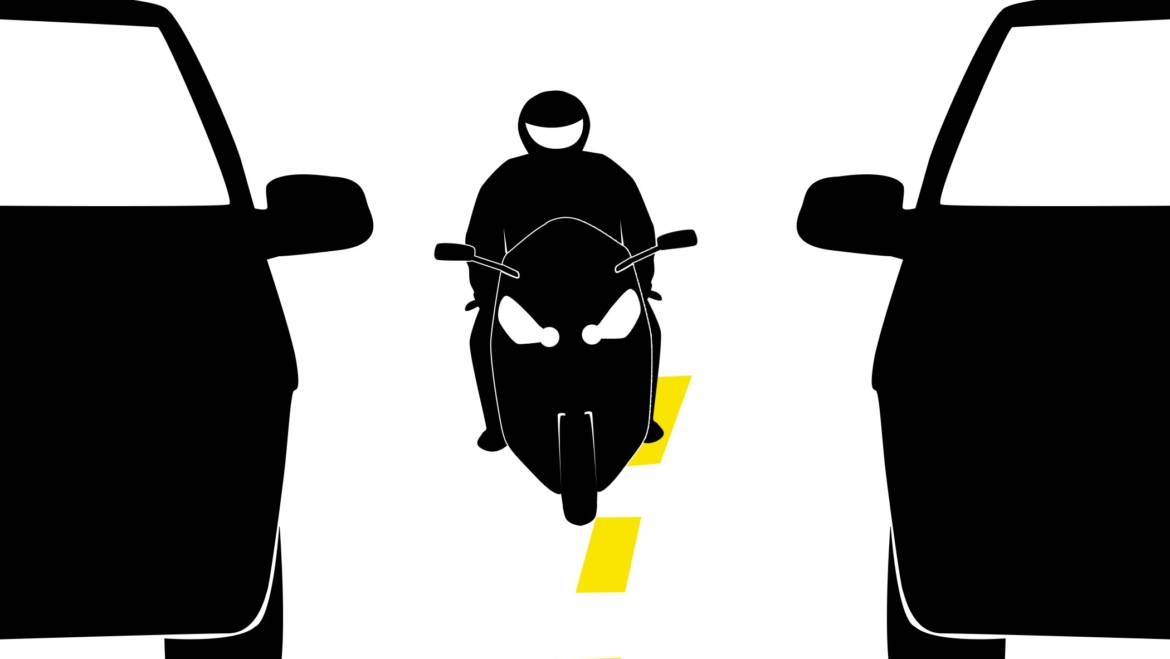 Other states considering whether to legalize lane splitting are looking to California for guidance. One of the big questions is whether lane splitting reduces motorcycle accident injuries.

What is lane splitting?

Lane splitting, also called lane sharing, stripe-riding, white-lining, or filtering, occurs when a motorcycle rides between lanes of stopped or slower-moving traffic. Lane splitting also happens at a red light, when a cyclist rides between lanes to the front of traffic. The motorcycle’s “lane” is on the line separating lanes of vehicles, hence the terms “stripe-riding” and “white-lining.”

California motorcyclists lane split long before the legislature passed Assembly Bill 51. The practice was so widespread that the California Highway Patrol (CHP) had published lane splitting guidelines. The guidelines are no longer available on their website. CHP is developing new guidance following enactment of the new law.

Prior to AB51, the California Vehicle Code language around lane splitting was ambiguous. The practice was not explicitly illegal and many motorcyclists, including law enforcement officers, lane split. Therefore, CHP would not ticket motorcyclists unless they were riding recklessly. The new law clearly articulates that lane splitting is legal.

Bikers and motorcyclist advocacy organizations have long supported cyclists’ rights to lane split, claiming it is safer for bikers than sitting in traffic. Lane splitting usually occurs when long lines of passenger vehicles are stopped in traffic or are inching along. In these situations, vehicle drivers are often inattentive or distracted. They are eating, grooming, playing with the radio, or using their phones. Even though using a handheld smartphone while driving is illegal, many drivers still do this, especially when stopped in traffic.

These stop-and-go traffic situations place motorcyclists at high risk of being hit from behind. Getting motorcyclists out of the line of cars reduces the cyclists’ chances of being rear-ended and suffering motorcycle accident injuries. Instead of being trapped between vehicles on all sides and having limited visibility, cyclists who lane split can maneuver into safe spaces and around danger.

NHTSA Issue Statement about motorcycles and lane use

Advocates of lane splitting say it is safer for motorcyclists because they have greater control over their space. Riding between lines of cars provides bikers with additional space in which to maneuver. The National Highway Traffic Safety Administration (NHTSA) and the US Department of Transportation seem to support this theory in their issue statement on lane use.

The issue statement says that motorcycles can “employ many strategies not available to drivers of other vehicles.” These strategies include

“This option can provide an escape route for motorcyclists who would otherwise be trapped or struck from behind. There is evidence (Hurt, 1981) that traveling between lanes of stopped or slow-moving cars (i.e., lane splitting) on multiple-lane roads (such as interstate highways) slightly reduces crash frequency compared with staying within the lane and moving with other traffic.”

Research into the connection between lane splitting and motorcycle accident injuries

The Hurt Report the NHTSA references is one of two widely cited studies of motorcycles crashes and cyclist safety. The other study, Motorcycle Lane Splitting and Safety in California, specifically looks at lane splitting in California. The UC Berkeley Safe Transportation Research & Education Center conducted the 2015 study at the request of the California Highway Patrol and the Office of Traffic Safety. The UC Berkeley study examined 7,836 motorcycle accidents in California in 2012-2013. Takeaways from the study include that motorcyclists who lane split are less likely than other cyclists to

Another significant finding in the UC Berkeley study was that lane splitting is safest when traffic speeds do not exceed 50 MPH and when the cyclist rides no more than 15 MPH faster than the traffic in the lanes.

Lane splitting saves time for motorcyclists. Many regular commuters say that lane splitting on their way to work cuts their commute time in half.

Lane splitting reduces congestion on California roads because motorcycles are on the roadways for shorter lengths of time. Also, lane splitting motorcycles do not occupy a space in a traffic lane. In addition, shorter motorcycle rides reduce fuel consumption and tailpipe emissions.

Finally, in hot climates, shorter rides are healthier for motorcyclists. Sitting in congested traffic in the heat while exposed to the sun and vehicle exhaust can make cyclists sick. Both cyclists and some motorcycles can overheat when idling for too long.

Who is at fault in a lane splitting motorcycle accident?

As with all motor vehicle collisions, a thorough investigation of the circumstances of the accident is needed to determine fault. Relevant facts include: